Tonja Lenderman, whose blog is Polyclay Corner, has been hosting the most amazing swap for a very long time. The idea behind this swap is that we all have stuff that we’re not going to use, or beads or polymer clay pieces that we’re not happy with, or that just aren’t right for some reason. Tonja came up with the idea to fill a box with her “trash,” send it off to a swap participant and have them take what they wanted (up to 25 items). That swapper would then replace the removed items with their own “trash,” then send it so the next person on the list. We had something like 25 people on the list…and wouldn’t you know, being up here in Alaska, I’m the last one before the box goes back to Tonja. This box has been on its way here for a LONG time. (And if you want to follow its travels and travails, Tonja’s been blogging about it since the start – and restart.)

Soooooo, it FINALLY GOT HERE! YEA!

All that fit in a medium flat rate box!

Here’s what I took out (except the 2 Polymer Cafe magazines I kept – which are already on my nightstand):

And here’s what I put in:

Non-cane stuff I put in

Canes I added to the box

This was so much fun! Thank you, Tonja, and BJ (who helped the swap get going again after a theft).

Just trying to figure out my photo posting problem!

Yea! I think I got it! 🙂 By the way, I made these pretty little girls last year. They’ve all found new homes and have hopefully received many hugs and participated in lots of tea parties since this photo was taken. 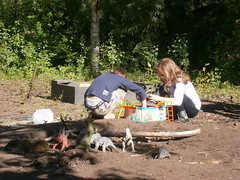 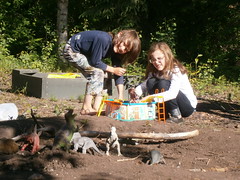 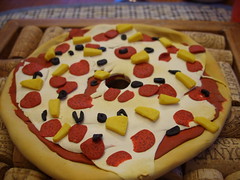